2015:  Dr. Smith lectured to veterinarians at the Western Veterinary Conference in Las Vegas

2015:  Dr. Smith was an invited guest to the 2nd International Dog Health Workshop in Dortmund Germany 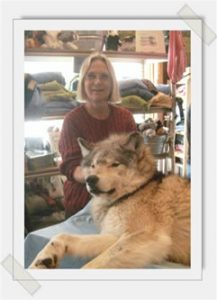 Dr. Smith worked hand in hand with members of the St Louis Zoo in their attempt to re-populate the endangered Mexican Wolf. At this time there are only about 150 Mexican Wolves left in the world and the St. Louis Zoo is looking to increase this number through an intensive breeding program.

To aide in this, the Zoo members came to Dr. Smith for her expertise in canine reproduction. She showed them how to breed the females using a technique called transcervical insemination on our local Timber Wolves.

July 2010:  Dr. Smith is the author of Chapter 1 (Prenatal Care of the Bitch and Queen) in the just published veterinary textbook, “Small Animal Pediatrics”.
March 2010:  Dr. Smith wrote an article in the March issue of Dog News: The Digest of American Dogs.   The article is called “Oh, My Aching…” and is about hips and elbows in dogs and how changes can affect gait.  She will be writing for Dog News on a regular basis, so watch for other articles!  Dr. Smith will also be attending the Crufts dog show in England this month.
September 30, 2009:  Dr. Smith is appointed Adjunct Assistant Professor of Theriogenology at the University of Minnesota College of Veterinary Medicine.
July 1, 2009:  Dr. Smith becomes an AKC Canine Health & Welfare Advisory Panel Member.  The panel consists of respected members of the veterinary and scientific community. The purpose of the endeavor is to alter and enhance the way canine health issues are understood and addressed in this country. This is the Advisory Panel’s kickoff year so keep checking in to see how the Panel progresses!

Dr. Smith spoke at the International Symposium on the Dog held in Europe July 6-7, 2009. She was the AKC Guest Speaker on the topic Animal welfare through genetic testing. The Symposium’s goal is to improve the welfare of dogs. The Chairman of The Kennel Club sent a letter to Dr. Smith after the event that stated her “contribution was very much appreciated and considerably added both content and prestige to the success of the event”!

Dr. Frances Smith was the Section Chairperson and spoke at the Society for Theriogenology meeting on August 10th-12th 2007 in Monterey California. The Society is a group of veterinarians dedicated to animal reproduction.

On 10/10/07 Dr. Smith spoke at the Gordon Setter National Specialty in Oconomowoc, Wisconsin.
Look in February 2008 DOG FANCY, you will find “America’s Favorite” an article on the Labrador Retriever along with many Quotes from Dr. Frances Smith!

Font Resize
Contrast
Accessibility by WAH
Call Us Text Us